Kings Heath before 1838
Not much is known about Kings Heath before the late 18th century. There was almost certainly no settlement along the current High Street, instead most of this area, stretching from to Poplar Road in the north down to Woodthorpe and Taylor Road in the south, was a vast expanse of open commons, heath and ‘waste’ which used by local people for common grazing.

No history about Kings Heath could be told without mentioning two key events which played a big role in the later development of the area: the creation of the Digbeth to Spernal Ash Turnpike Road  and the enclosure of the heaths.

In 1767 an Act of Parliament of put the road from Spernal Ash to Digbeth, via the King’s Heath, in the care of a turnpike trust to maintain and to improve it¹. Progress on improving the road was slow, but the road, which would have originally been little more than a winding track leading across the commons was gradually straightened and widened,  leading to an increase in traffic as farmers broughts goods from the surrounding Worcestershire to sell in Birmingham’s markets.

In 1772 The Enclosure Act was passed for “Dividing & Enclosing the Commons & Waste Lands within the Manor & Parish of King’s Norton²”.  These changes took place as part of the wider Agricultural Revolution which resulted in a modernisation of farming methods and vastly increased the agricultural output of farmland through this period.

Under this act the Kings Heath was divided up amongst the existing large landowners at that time.  Each of these land parcels were called an ‘allotment’ and a duty fell on the new landowners to enclose their new land by planting new hedgerows.

The map below shows Kings Heath how it may have appeared in around 1770 before the enclosure of the heath.  No detailed maps exist for Kings Heath for this time so this map is conjectural and is based on the following sources:

As you see there are settlements shown on the edge of the heath but it is not known for sure whether there were any buildings within the Heath itself. Although The Grange building and houses are shown above the northern extent of the heath on this map, it’s possible that these were only constructed after 1772 when the heath was enclosed.

Pineapple Farm, situated at the bend of Black Lane and Fordhouse Lane is likely to be one of the oldest settlements in this area. By 1838 a relatively new small-but-growing settlement now existed along the location of the modern day High Street.  Land use elsewhere in Kings Heath was still very much rural with a mixture of arable lane, pastures and meadows with a handful of estates with large landscaped gardens. There were a scattering of farm ponds and small plantations.  The only stream in this area appeared to be a small stream flowing southwards from just south of Black Lane (now Vicarage Road) to join first the Haunch Brook (which flows through Billesley Common), Chinn Brook and then finally the River Cole to the east.

By 1838 the following roads were already in existence:

In 1838 the following roads existed but in the present day are no longer in existence:

In 1838 the nucleus of the settlement of Kings Heath centred around the Turnpike Road from Black Lane to just north of Poplar Road. 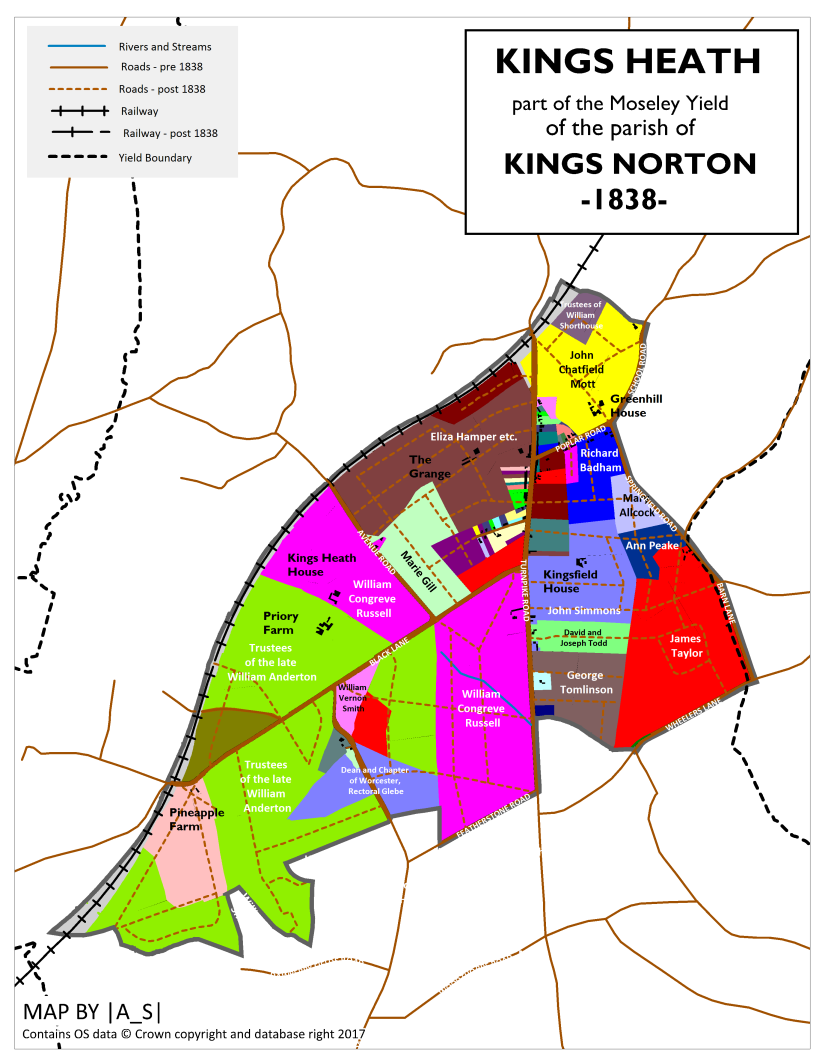 The Western side of the High Street

Going from north to south on the western side from the top of the ‘high street’  was a house plus offices, stable and road belonging to the Birmingham & Gloucester Railway.  This would be the site of Kings Heath Rail Station which opened (as Moseley Station) in 1840.  Next along the high street were a series of pastures and then a carriageway leading to The Grange Estate.

The Grange was a large mansion built towards the end of the 18th century, shortly after the construction of the Digbeth to Spernal Ash Turnpike Road⁴.

The house, along with associated offices, farm buildings and gardens was located west of the Turnpike Road along a carriageway, which ran east to west and, like the extensive lands of the estate,  extended all the way to Dads Lane. The Grange estate also extended westwards to Shutlock Lane, and included the northwestern corner of the present day Highbury Park.  A further part of the estate lay between Dads Lane and Moor Green Lane.  The estate was cut in half by the construction of the Birmingham and Gloucester railway. 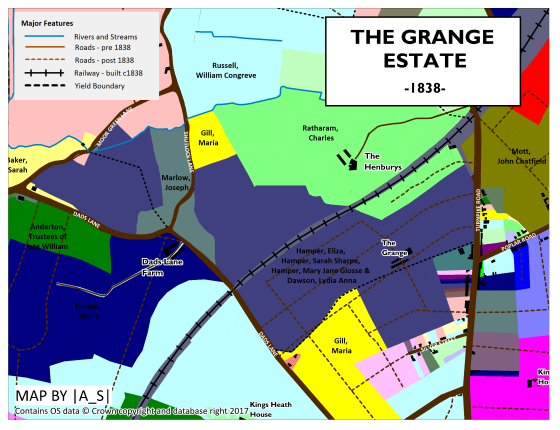 In 1825 The Grange was inhabited by William Hamper, who was Justice of the Peace for Warwick and Worcester. After William’s death in 1831 the estate passed to his daughters, Eliza Hamper, Sarah Sharpe, Mary Jane Hamper and Lydie Anne Hamper who are listed as the landowners by the time of the 1838 map.  The house and land at this time was actually occupied by Thomas Sharpe who is thought to have been Sarah’s husband.

In 1895 the Birmingham Freehold Land Society purchased the Grange Estate and seven new roads were laid out and the land was developed as housing.

Immediately south of the driveway to The Grange and opposite Poplar Road was the first of Kings Heath’s two pubs (at this time)  – The Cross Guns Inn.  The Inn, which was the first to be built in Kings Heath was made by converting two cottages sometime in the 18th century⁵. A prominent pear tree growing outside the pub gave it its local nickname of The Pear Tree.  The pub was replaced by a much larger building in 1897 which still stands today.  In the 1990’s the pub was renamed and is now known as The Goose.

Behind the pub there was a brewery, dating from 1831 where the licensees brewed their own beer.

Moving further southwards down the western site of the high street were a series of eleven houses and then a Baptist Chapel which was built in 1815 – the first church in Kings Heath. The building was rebuilt firstly in 1872 and then again in 1898 in its current site on the High Street⁶.  A further six houses separated the church from the second of Kings Heath’s two pubs – the Hare and Hounds.

The Hare and Hounds

The Hare and Hounds was built at some point between 1824 and 1828 by Aaron Payton⁷ who was still listed as its owner at the time of the 1838 map.  The original building was probably originally a cottage which was enlarged to create the pub.  Intriguingly in the tithe awards of 1838 it describes the pub as having a garden and moat. In 1907 the pub was enlarged and rebuilt in its current form today. In 1838 adjoining the Hare and Hounds was a house, shop and piggery.

York Road didn’t yet exist so after the Hare and Hounds the first road we come to leading off the High Street is Silver Street which had 12 houses listed along it in 1838.

The Eastern Side of the High Street

We again start our journey at the northern end of the high street, opposite the present day Station Road.  Here, north of Poplar Road, were a series of 31 houses, a shop, a blacksmith’s, a coopers and a beerhouse.

Poplar Road had three houses and a beerhouse on its north side and ten houses on the south side.

Just south of Poplar Road was a wheelright, a bakehouse, a slaughter house and 13 houses.

Opposite Silver Street was a Brickyard and two houses owned by Joseph Todd.

A large proportion of the landscape in 1838 was still dominated by agriculture and this land was owned by a relatively small number of large landowners.  The biggest landowner in the area was James Tayor.

James Taylor (soon to become Tory MP for East Worcestershire in 1841) resided in Moseley Hall and owned large tracts of land in Moseley, Kings Heath, Haunch Heath and also in other nearby parishes.  In Kings Heath he owned an area of farmland located off Barn Lane including a house and stable located at the junction of Barn Lane and Billesley Lane (then Bully Lane).  This house and immediately surrounding pastures were occupied by Thomas Bate.

On the east of the High Street on the site of the present day Catholic College stood a house known as Kingsfield House.  In 1838 the house, along with offices, farm buildings, orchard and gardens, was owned and occupied by John Simmons.  The estate, which included surrounding meadows and pastures was developed for housing in 1890 and is now the location of Addison Road, Drayton Road and Goldsmith Road.

East of the Kingsfield House estate were fields owned by Ann Peake and Mary Allcock, the latter of which also owned farmland east of Springfield Road.

Land at the Corner of Springfield Road and Poplar Road was owned by Richard Badham, a stone mason.

North of Poplar Road was Greenhill House owned by John Chatfield Mott, a currier who lived there in 1838 with his wife and his wife’s unmarried twin sister.

Off Black Lane, in the present day location of Kings Heath Park stood Kings Heath House.  The original house here, belonging to John Harwood, was burned to the ground during riots in 1791.  By 1838 the house, which was rebuilt in 1832, was owned by William Congreve Russell, a Whig MP elected in 1832 as one of the two Members of Parliament for East Worcestershire until he stood down in 1835.  From 1839 he held the post of High Sheriff of Worcestershire.

William Congreve Russell was a large landowner in the area and also owned other areas of land including a farm south of Black Lane/west of the Turnpike Road which in 1838 was occupied by Henry Chinn and a large tract of land stretching all the way from the present day Highbury Park northwards to Cannon Hill House.

Kings Heath Park was originally laid out around the time the house was rebuilt in 1832 and in 1838 is shown to include a landscaped pleasure gardens consisting of the present day pool and woodland.

Next to Kings Heath House, on the site of the present day King Edward School stood Priory Farm.  The 17th century building was owned in the 1800’s by gun-maker William Deakins of Sarehole Mill.  By 1838 it was owned by Trustees of the late William Anderton of Wake Green who sold the house in 1845 to brassfounder James Cartland.  He rebuilt the house in a gothic style and it was renamed Bleak House.  The house was later renamed The Priory and in 1940 both the house and grounds was sold for the building of the school.

Pineapple Farm, which was situated at the corner of Black Lane and Fordhouse Lane is thought to be quite old and would have existed as an isolated farmstead on the edge of the heath.  The farm was mentioned in 1680 as “lying near to King’s-heath and Hasslewell”

In 1838 it was owned by George Frederick Muntz and occupied by Samuel Taylor. George Muntz also owned meadowland along the River Rea north of Fordhouse Lane.

The farm was demolished and developed for housing in the 1920s.

Much of this article was written with the help of the research of Kings Heath Local History Society.  If you would like to read more about the history of Kings Heath then their website if invaluable.

Other Parts of Kings Norton Parish:

View all posts by Andy Slater